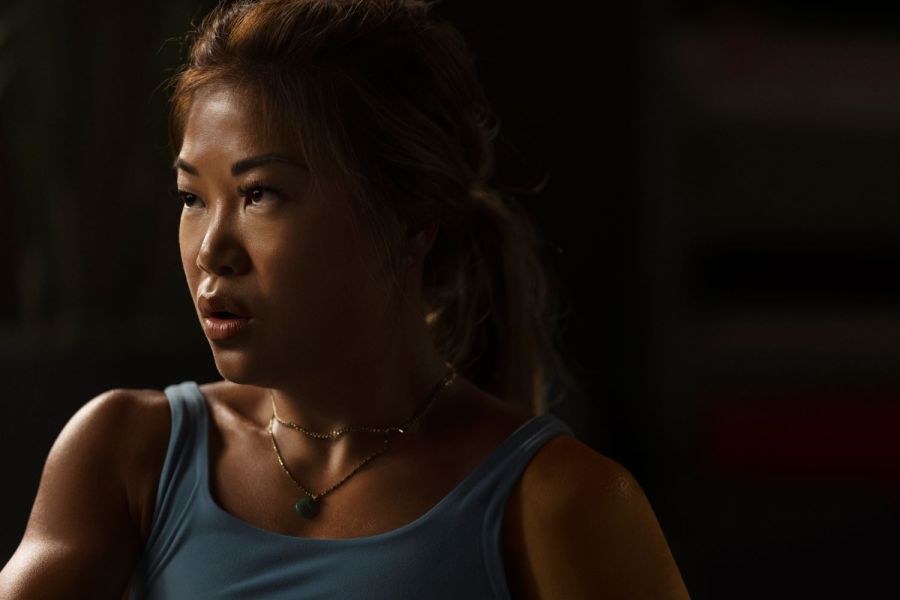 Ahead of the Tokyo 2020 Paralympic Games, we caught up with American Paralympic track and field athlete and Peloton Champion, Scout Bassett, who shares the ‘rollercoaster’ story of her sporting career, before discussing her hopes for the future of Paralympic sports… 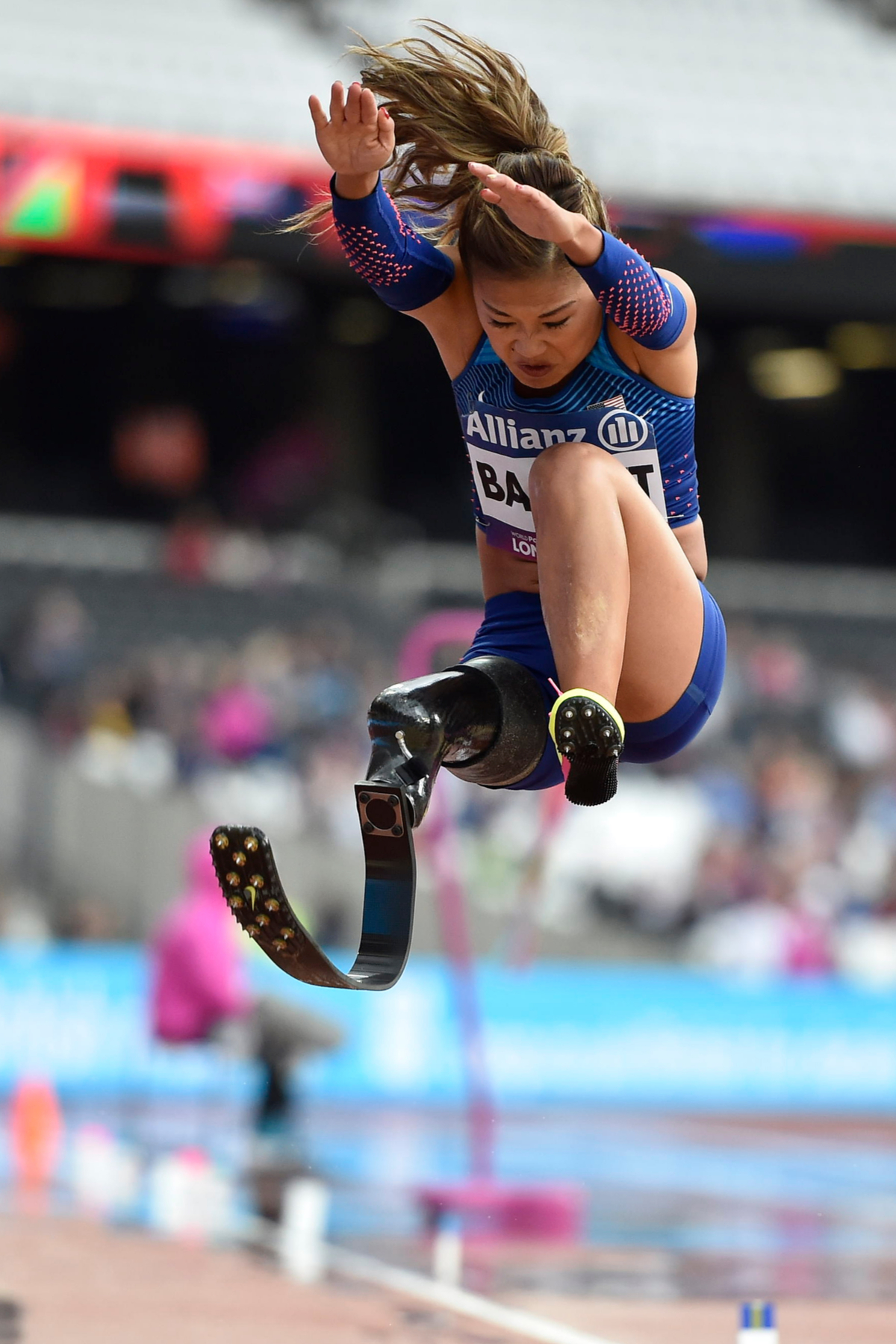 How did you get into sprinting and long jumping?

Scout Bassett: ‘Sprinting actually came first, quite a few years before long jump. When I started to run at 14, I was more into distance running. I began with 5K and 10K, then worked my way to marathons. I didn’t get involved with sprinting until I was in college at UCLA, where US Paralympics recruited me. After focusing on sprinting for two or three seasons, I then got into long jump. It’s been quite a ride!’

You’ve truly fought the odds to get to the elite level you’re at today. What has it taken?

Scout Bassett: ‘This journey has been harder than I ever thought it would be, but it’s also been more incredible too. Physically, it has obviously been very challenging and difficult. Anytime you’re working with something that is unnatural for your body, like having your residual limb in a confined hard carbon fibre casing and then just to be pounding on the blade every day, it takes quite a physical toll on you – particularly in your back and hips flexors. The other side of your body has to compensate and work to sort of offset the prosthetic.

‘I think people imagine that when you run, you just go to the local sporting goods store, pick up some shoes and an outfit, and you’re out the door. To run with the prosthetic is nothing like that. It’s far more intense and laborious. The processes can be quite long, but I think, mentally, that’s probably been the more challenging aspect.

‘The journey is with many ups and downs – it’s a rollercoaster. You battle setbacks and injuries, or disappointments and failures. You have to train your mind to navigate through those seasons of life: to rise above, get back up, and to keep fighting. I think this takes far more strength, skill and courage than the physical aspect, and that’s always what I’m trying to improve on – the mental strength and fortitude required to be an athlete.’

What’s been your career highlight to date?

Scout Bassett: ‘I would say the World Championships in London in 2017 was one of them. It was a huge career highlight to win my first two global medals. Another big career highlight was the gold medal win at the Parapan Games in 2019, but I know that’s not going to be the end. I fully expect there will be more career highlights to come!

‘I think the thing that I’m most proud of is just to see that so many other girls, including so many of my mentees, have got involved in Paralympics or sport. I’m most proud of this because they say that the sign of a great legacy is that, when you leave, it’s much better than when you came. The future’s just so bright for these young kids and to see what they’re going to be able to do gives me just enormous pride.’

What does a typical training week look like at the moment?

Scout Bassett: ‘Right now is really the best time of the year because it’s all about being healthy. It’s also about a lot of rest at this time of the season. We focus on short and quick maintenance work and correcting the little things at this point. There’s not much of the high volume or the super long days. It’s still five days of training a week but it’s nice that we’re getting a lot of rest and recovery because you really want to be at your best during the championship season or at the Games.’ 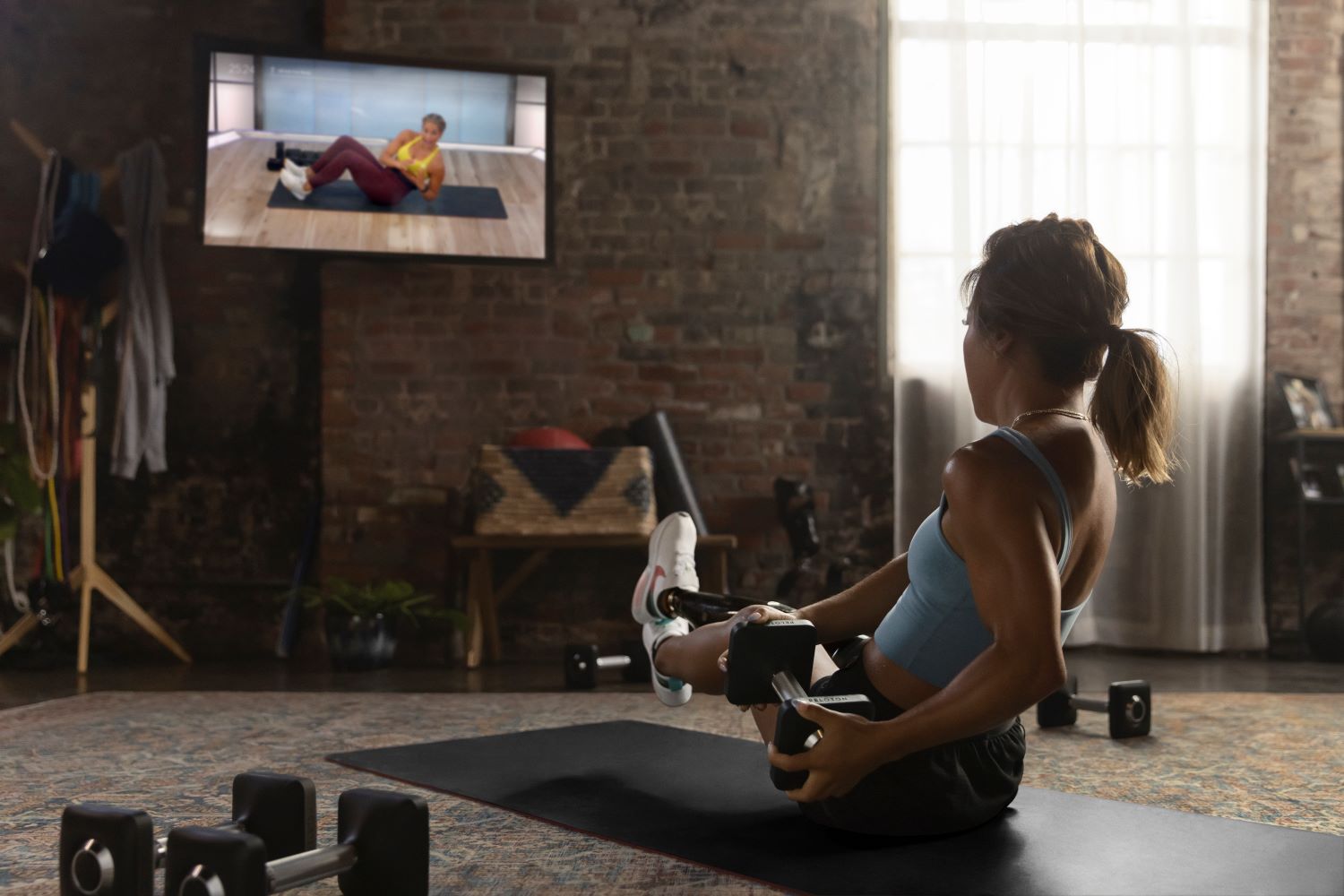 Scout on the Peloton App: ‘To be part of a community where I didn’t feel so alone really lifted me up.’

Did you continue training during lockdown?

Scout Bassett: ‘Yes, I did, but it was very abnormal for us going to local parks and trails to run. I also didn’t have access to a gym or any gym equipment. That’s why I picked up Peloton during the lockdown. I wanted something that gave me the feeling of exercising as if I had gone to the gym. The Peloton app and workouts allow me to work on my core and get in some cardio at home, with basically no equipment. Plus, I loved feeling like I was part of a great community by being on the platform.’

What does it mean to you to be a part of Peloton’s Champions collection?

Scout Bassett: ‘Well, first of all, I’m so honoured to be in the company of two of the GOATs [greatest of all time] in athletics – Usain Bolt and Allyson Felix, who are also Peloton Champions. But for me, this is a personal achievement too. I remember the day the announcement came out and how many people had reached out to me that said they were so thrilled that somebody that had a disability was part of this collection and part of a fitness workout program. You hardly ever see people with limb differences or having some sort of disability on those platforms. It’s so underrepresented.

‘To hear so many people had felt that we’re moving forward was so encouraging and such a great sign to me. I’m really just humbled and proud that Peloton saw something valuable in me and wanted to support me in that way, and I just can’t express my gratitude enough. It’s not that long ago that an opportunity like this would have been completely unheard of, so I’m just really appreciative, but more importantly, I’m so thankful to be a part of such a great community. To do the workouts and see who’s on the leaderboard and have people giving high-fives as you’re working out is just such a great boost!

‘For me, I was alone almost the entire pandemic, so to be part of a community where I didn’t feel so alone, plus to see people working towards their goals and pushing through in such an uncertain and difficult time, really lifted me up and pushed me to continue to work towards my goal of the Tokyo Paralympics.’

Scout Bassett: ‘Yes, for the most part. I am not one of those people who counts every macro – I’ve done that during certain periods of my career but, nowadays, I follow a mostly plant-based diet. I try to target just a certain amount of protein every single day as a great form of recovery, along with a little bit of carbs. I’m trying to limit my sugar, although I will say that’s a little bit of my weakness because I love sweets!

‘Generally, I eat healthily, but I’m also of the belief that the things you enjoy, or foods that give you a little bit of comfort, are okay to eat in moderation. I’m not on a restrictive diet but I certainly try to lean towards the healthy, plant-based, farm-to-table kind of concept.’ 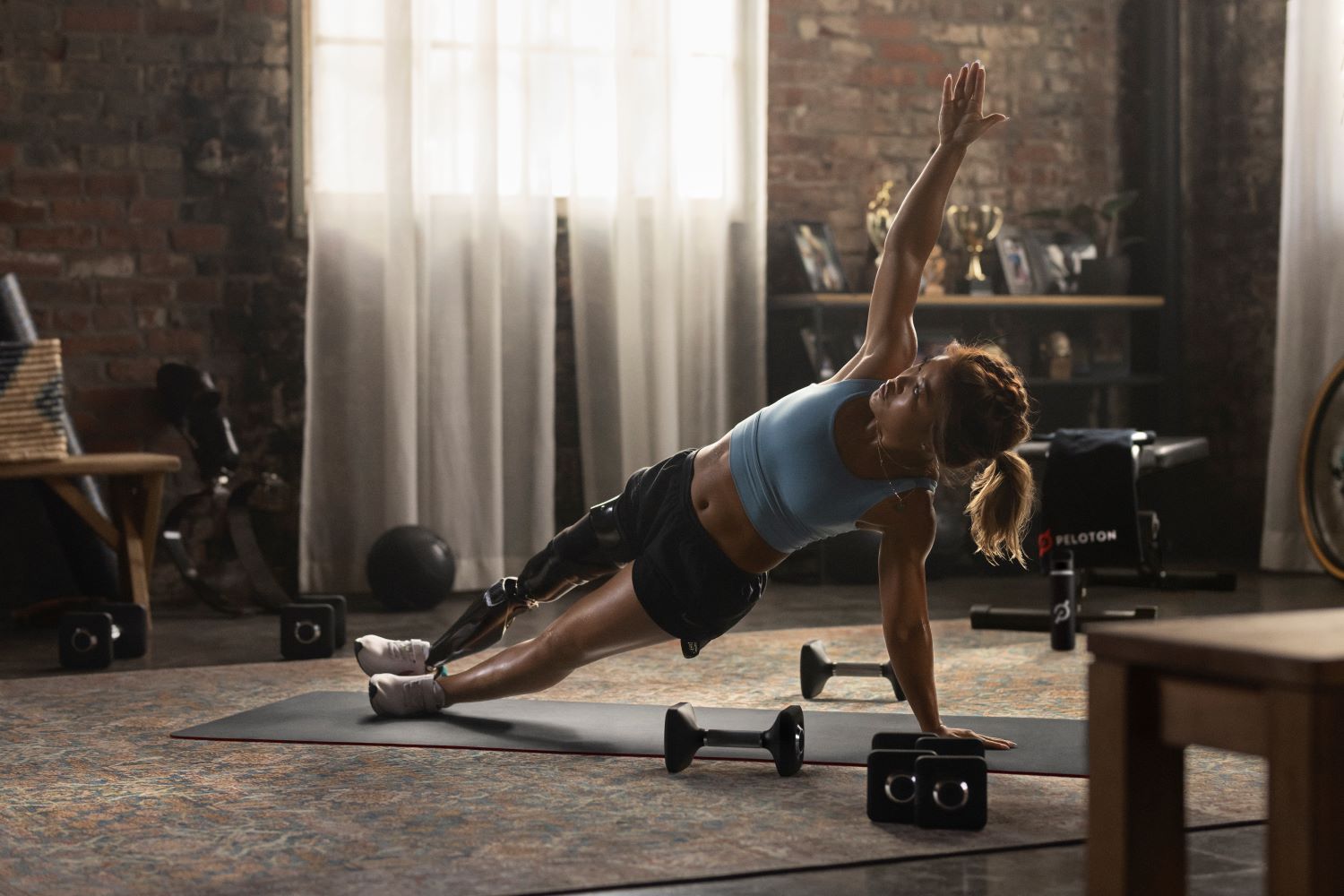 Scout: ‘It’s great that disabilities and Paralympians are out there in the mainstream.’

What’s your experience as a Paralympic athlete?

Scout Bassett: ‘It’s been really cool to see the journey because, when I started out doing this, even as a young girl or before I ever even knew about the Paralympics, I never saw people that looked like me on TV or in magazines, or on a commercial or any sort of mainstream media. I think, in that sense, I didn’t know if any of what I’ve achieved would be possible. Fast-forward to now and I’ve just been overwhelmed by the support and the love. It’s great that disabilities and Paralympians are out there in the mainstream. I hope that a young kid sees this and realises that it’s possible for them too. They’re not alone and they just need to keep pushing for their goals and their dreams.

‘Of course, we’ve seen great progress, but I think there’s still a long way to go in terms of the experience for Paralympic athletes and the opportunities in competition. There’s a lot of work still to be done, but it’s great to see more visibility for Paralympic athletes. I know, in the UK, they’re rockstars and big celebrities; here in America, they’re finally getting more exposure, which I think is really important.’

What’s the most frustrating and best thing that you face?

Scout Bassett: ‘The most frustrating thing is that there’s a bit of inequity in our sport and in the Paralympics itself. For women, there are fewer sports and events, meaning significantly fewer women compete at the Paralympic games compared to men.

‘For example: in athletics, there are 20 fewer medal events for women than men. When we consider the Gold, Silver and Bronze medals, that’s 60 medals that a woman does not get the opportunity to compete for at the games. Some people might say “it’s just a medal” but it’s not. For many athletes, those medals can help to set them up for their future and create more opportunities in their career. So, when I look just how much a medal means, and consider that women get 60 fewer opportunities to achieve that, we’re not really there yet in terms of equality. I find it frustrating but I’m really hoping to shine a light on it and to inspire change.

‘The best part of what I get to do, which I alluded to earlier, is getting to work with and guide so many young kids who are pursuing sports in Paralympics. That is so powerful because I see so much of myself in these kids. I remember how much I struggled growing up, and I had no guidance and felt totally alone. Society and culture made me feel like I was like a freak. As a kid, that had huge effects on my self-esteem. Now to be a part of their lives and to have opportunities to show them that they’re not defined by a single accident or traumatic moment in their life or even by their disability. I want them to know anything is possible. Being part of their journeys gives me great joy and keeps me moving.’ 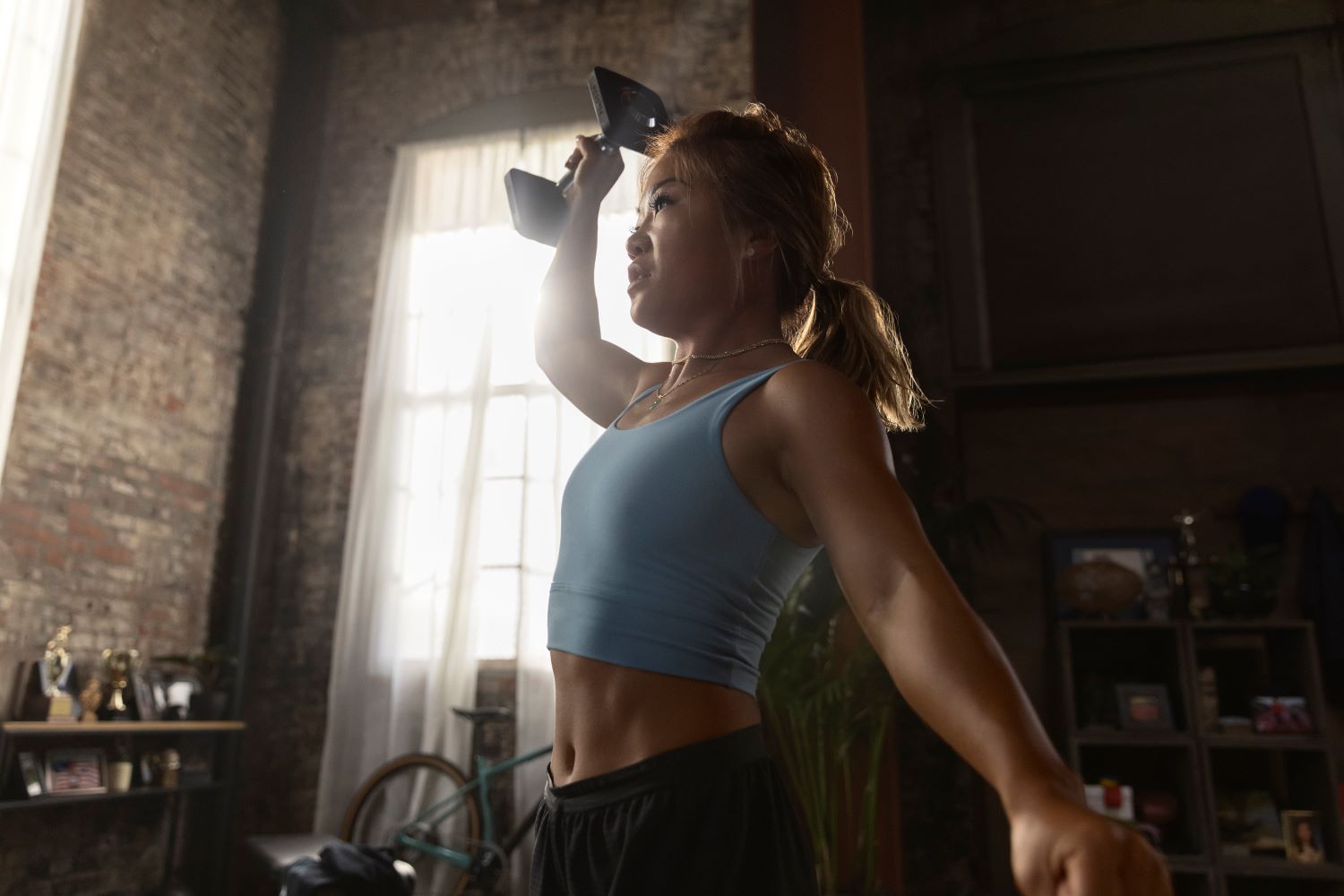 What are your hopes for Paralympic sport over the next few years?

Scout Bassett: ‘I touched upon the gender equality issue but I also think there needs to be a bit more comprehensive evaluation of the classifications. This is a big problem in many Paralympic sports. I know it’s a tricky issue, but sometimes we see people of equal level impairment who are not competing against the correct people. There’s got to be a more fair way to group these athletes. Otherwise, I think it’s going to deter a lot of young kids from getting involved in this sport: when you realise you have to compete against people that are not of the same impairment, why would you? I’d like to see a proper evaluation of the current systems that are in place and the creation of a programme that truly benefits all athletes.

Click here for our interview with Wimbledon star Jordanne Whiley!