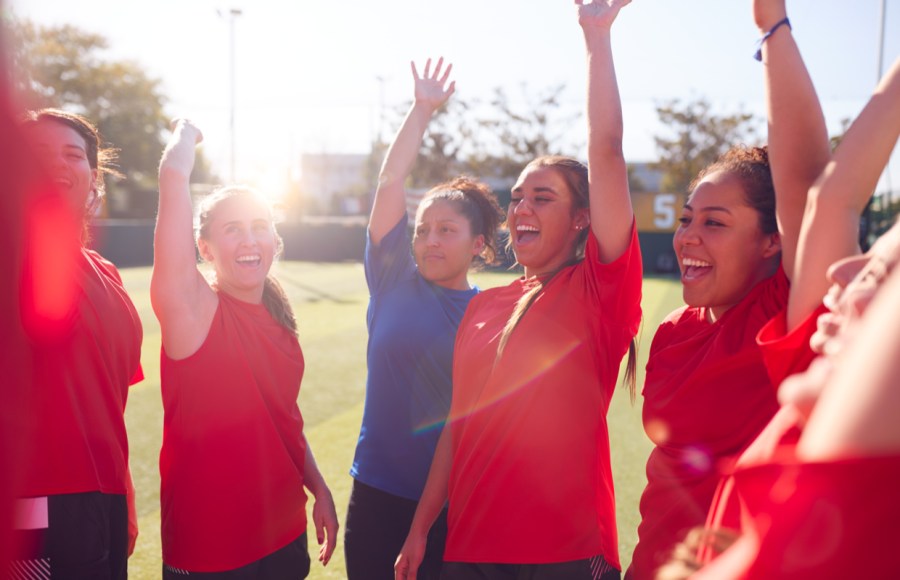 Want to increase your all-round health and boost your long-term happiness? It’s time you took up a team sport this autumn. We look at the benefits of team sports, before exploring the different options available…

According to the Women’s Sport Foundation, girls and women who play sports have higher levels of confidence and self-esteem, a more positive body image and lower levels of depression than women who don’t play sports.

Obvious physical benefits aside, playing team sports can also enhance character-building traits such as teamwork, leadership and loyalty. It can even help women further their careers, with a study from Ernst & Young revealing that 94 per cent of women in C-suite roles (the highest-ranking executives in the company) had played sports.

Moreover, 70 per cent of women in the study said that a background in sport was helpful to their career progression. This is because involvement in sport helped them to work better in teams. Which raises the question: why are women less likely than men to play competitive sport when they have so much to gain in multiple areas of their lives?

Research from Sport England has shown that more men do sport and activity than women at almost every age group. Figures suggest that the decline starts at school.

Pre-pandemic, 65 per cent of boys in years one to 11 participated in team sports at least once a week. This is compared to 46 per cent of girls. A further study from Women In Sport says that, by the age of 14, only one in 10  girls are doing enough physical activity to benefit their health.

Opportunities for women in sports throughout history

Where are we going wrong? ‘There are a number of reasons, some of which stem right back to what society historically considered appropriate for women,’ says Sue Anstiss, a founding trustee of the Women’s Sport Trust, co-founder of the Women’s Sport Collective, and author of the new book Game On: The Unstoppable Rise of Women’s Sport (£20).

‘Women were led to believe that being  “feminine” meant being gentle and passive, not being strong and powerful, fearless and brave. Fortunately, we are seeing this change in society, but many of the tropes still exist.’

Stephanie Hilborne, CEO of Women In Sport, agrees. ‘Stereotypes from childhood, a lack of the right sports provision for girls at school and in the community, and an absence of advice during puberty means most women missed out as girls on positive experiences of competitive sport. They don’t, therefore, look to take part as adults,’ she explains.

‘Competitive sport requires someone or a group of people to play with. However, women’s lives in adulthood are hugely time-deprived, with women typically having a quarter to a fifth of the leisure time men have. Lack of time and social conditioning to put themselves last means exercise is squeezed in around others’ needs. Fine for a quick run, impossible for team training.’ 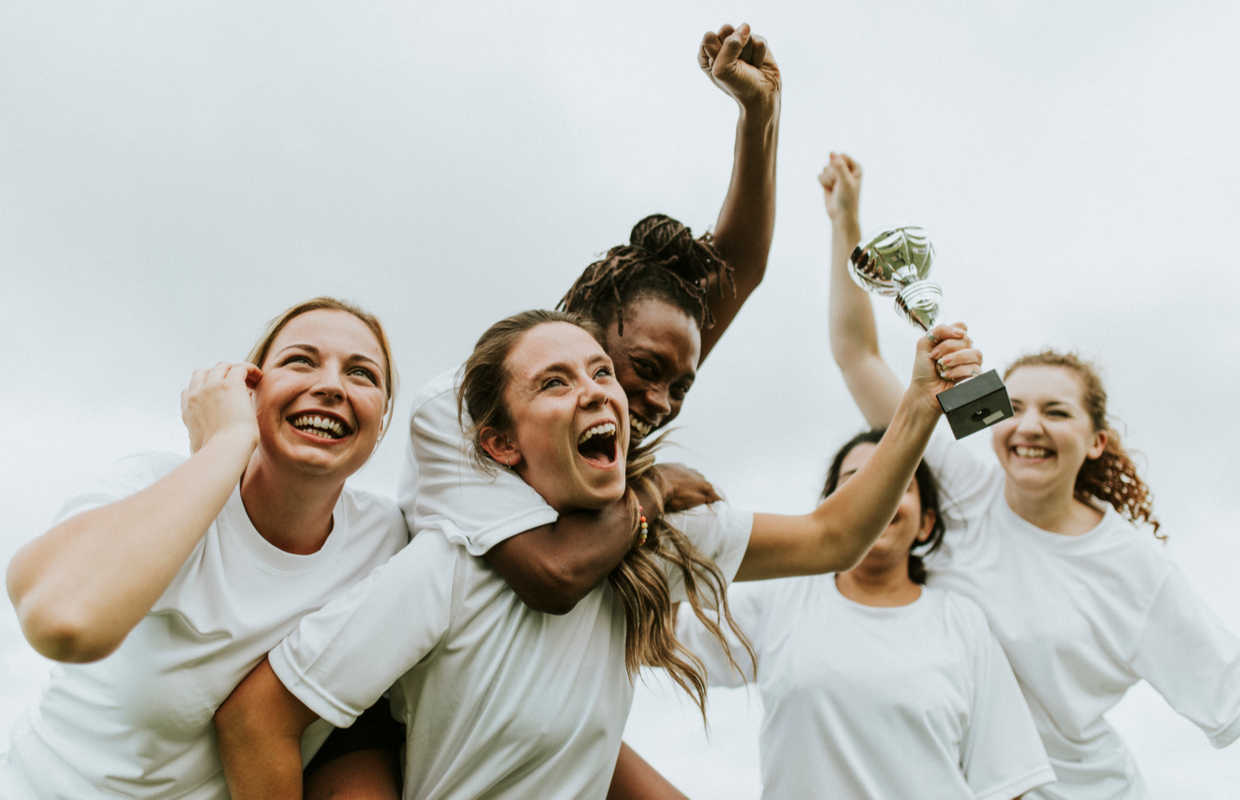 Another issue is that team sports have only started catering for women in recent decades to give them the chance to join clubs at grassroots levels: ‘Many sports are still very male-dominated in terms of who runs them and who makes decisions,’ says Anstiss.

‘Women’s rugby is the fastest growing area of the sport now, making up almost 30 per cent of the playing population globally. However, at many clubs, women are still considered second-class citizens. This is reflected in how they are funded, their access to kit, and playing and changing facilities,’ she points out.

‘Additionally, we haven’t been able to see women playing team sport at the very highest levels until recently, but many girls and women need to “see it to be it”. Women’s sport only accounts for five-to-10 per cent of media coverage, so females don’t see sport as something for them.

Thankfully, we are now witnessing massive changes, with female athletes finally being paid to play as professionals across sports like cricket, football, netball and rugby. Plus, broadcasters are making these competitions available for millions to watch for free.’

How to join a sports team

The good news is that it’s never been easier to get involved, whether you’ve never participated in a team sports, or it’s been decades since you last played. ‘There are so many different sports out there to try. From the full-on physical sports like football or rugby, to more sedate team sports like rounders,’ says Anstiss.

‘Many sports are now developing new formats to make them more accessible to all people regardless of fitness levels and age. So, it should be fairly easy to find something you love.’ Once you find the right sport, it’s important to be confident that people will be welcoming, says Hilbourne, because they almost always are.

And remember that it doesn’t matter if you’re not starting out with all of the skills you need to play, because few people do and new skills can be learnt surprisingly fast. ‘Believe in your body but look after it, too,’ she adds.

‘Be serious about stretching and build up [your fitness] slowly if you’ve been fairly inactive in recent years. Try to avoid injury by prioritising your body and being honest with yourself and your teammates about where you’re at physically.

‘Very soon, you’ll be enjoying the freedom, camaraderie and joyfulness of playing a team sport. Not to mention the satisfaction that comes from a series of accurate passes, great catches and a well-aimed goal.’

Which team  sport is right for me?

These accessible and inclusive sports are some of the best to try in 2021. 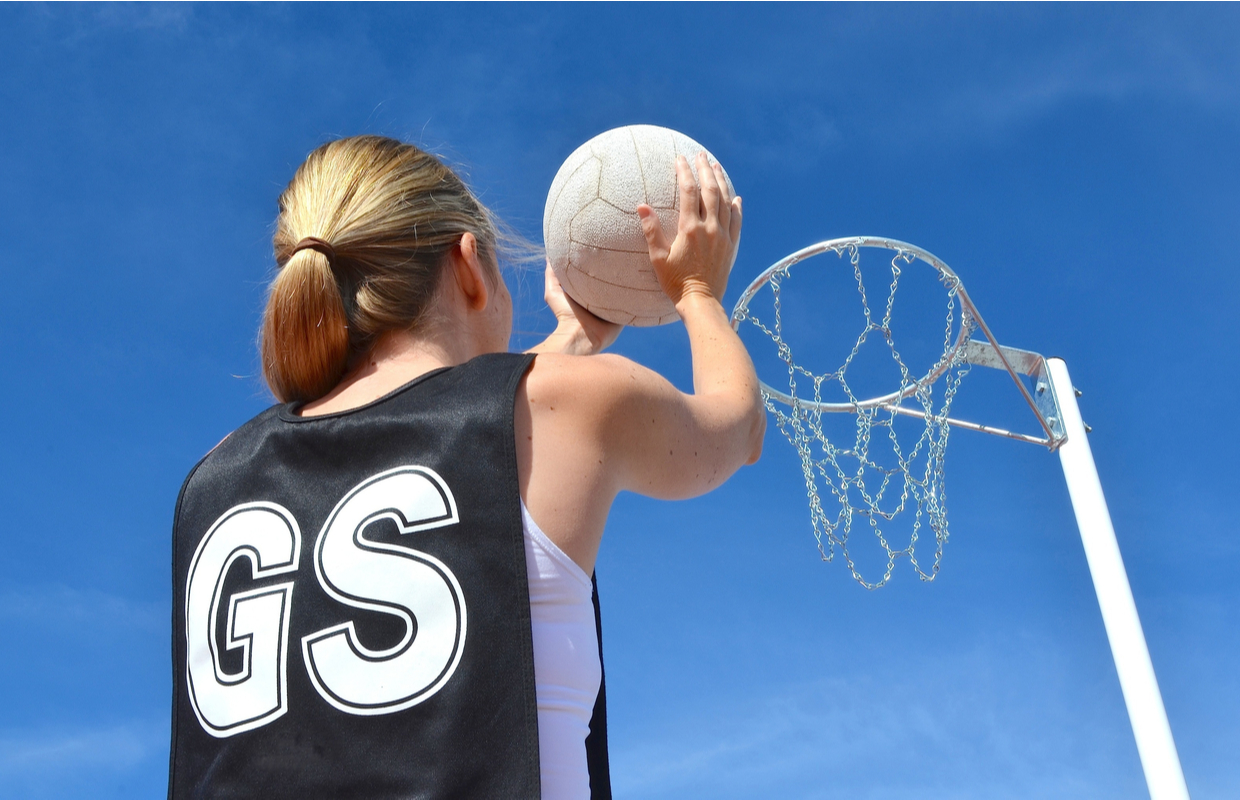 Played by two teams of seven players, netball improves your hand-eye coordination and builds muscle strength and stamina. Almost one million women and girls played netball at some point in 2020. This makes it the number one team sport played by females in England.

Get involved: Head to the England Netball website where you can find details for England Netball clubs, sessions and programmes in your area, including Back to Netball (rediscover your love for the game in a fun, friendly environment), Walking Netball (a slower version of the game) and Netball Now (play a game without committing to a club). 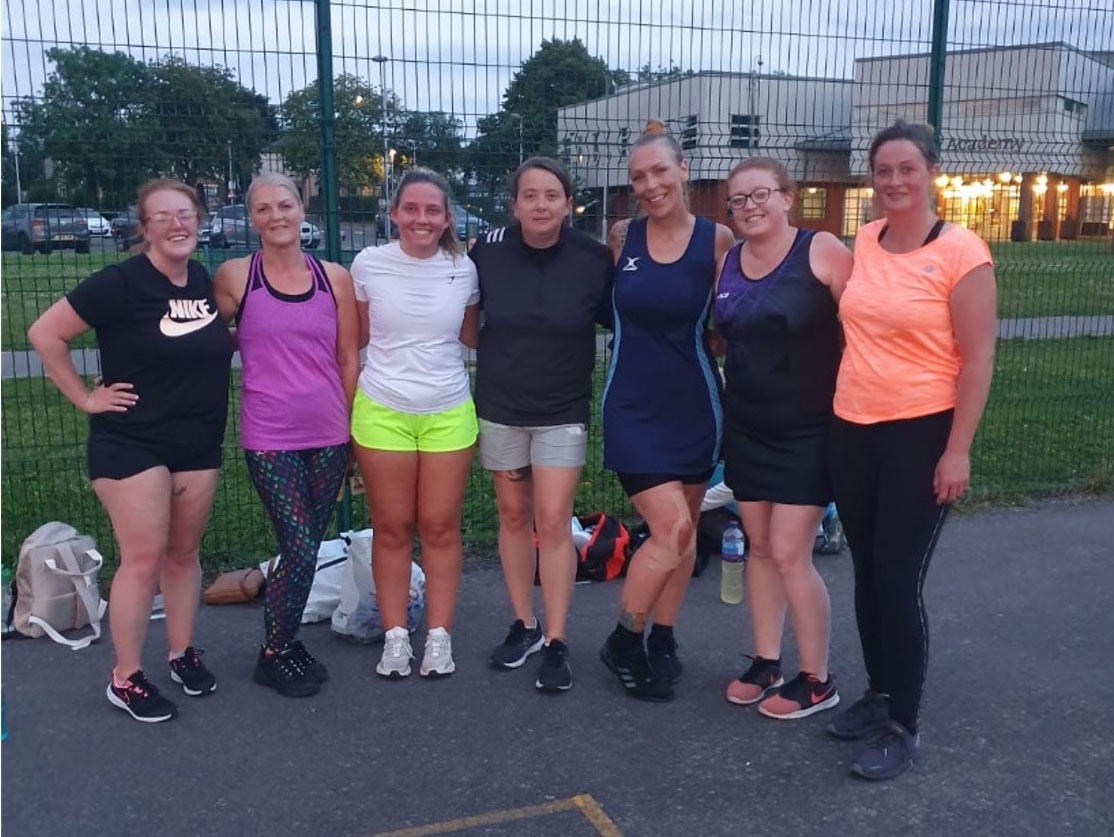 Lisa Durand (third from the right), a mental health recovery worker from South Yorkshire, plays netball. She says: ‘At eight-years-old, I was asked to play goalkeeper for the school netball team, mainly because I was already 5’ 8”.

‘In secondary school, I was scouted to play in the Regionals. This was something I did until I became pregnant at the age of 20. Suddenly, I was 32 and hadn’t played a team sport since.

‘One morning, I started googling local netball teams. A week later I had my first game. That was four years ago and I’ve never looked back. I’ve made amazing friends and we’ve won the league twice.

‘I play for four different teams in four different leagues now. Some are more serious than others, but I love that because I’m very competitive and it helps channel my temper.

‘I had a bad injury during this time and my surgeon said I’d probably never play again. I was determined to return, as playing a team sport is the one thing in my life that supports my mental health. It keeps me focused and helps me maintain the mindset that “this girl can and will!’ 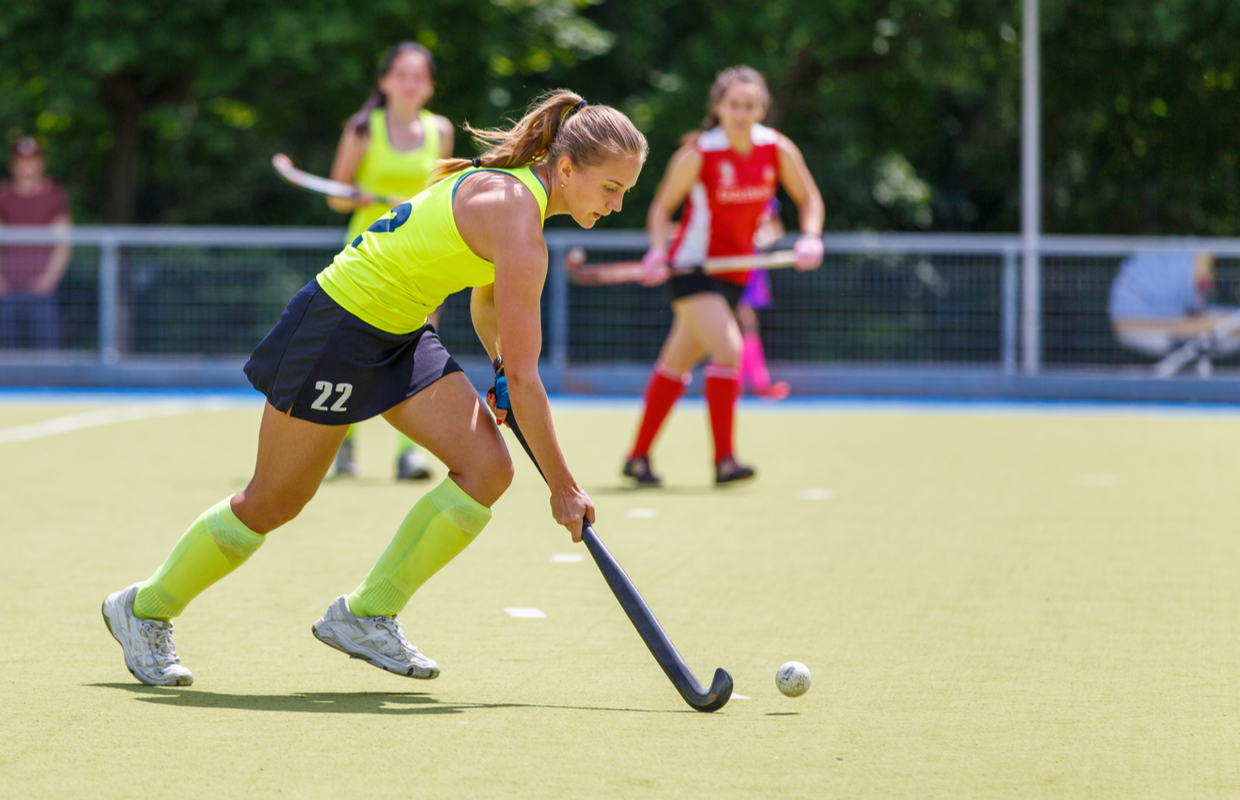 With games consisting of two 35-minute halves, hockey effectively works your heart and lungs while you run around the pitch. It’s also a great way to develop your upper and lower body strength and endurance. You’ll also improve hand-eye coordination, and boost your agility.

Get involved: Check out englandhockey.co.uk to find a club. If you can’t commit to League Hockey, try Small Sided Hockey, which requires fewer players, so there’s less pressure to turn up.

Mixed Hockey, where men and women play on the same team, is sociable and a less competitive option. Walking Hockey is also available. The Vitality Back To Hockey scheme is aimed at those looking to play for the first time or who haven’t played for several years. 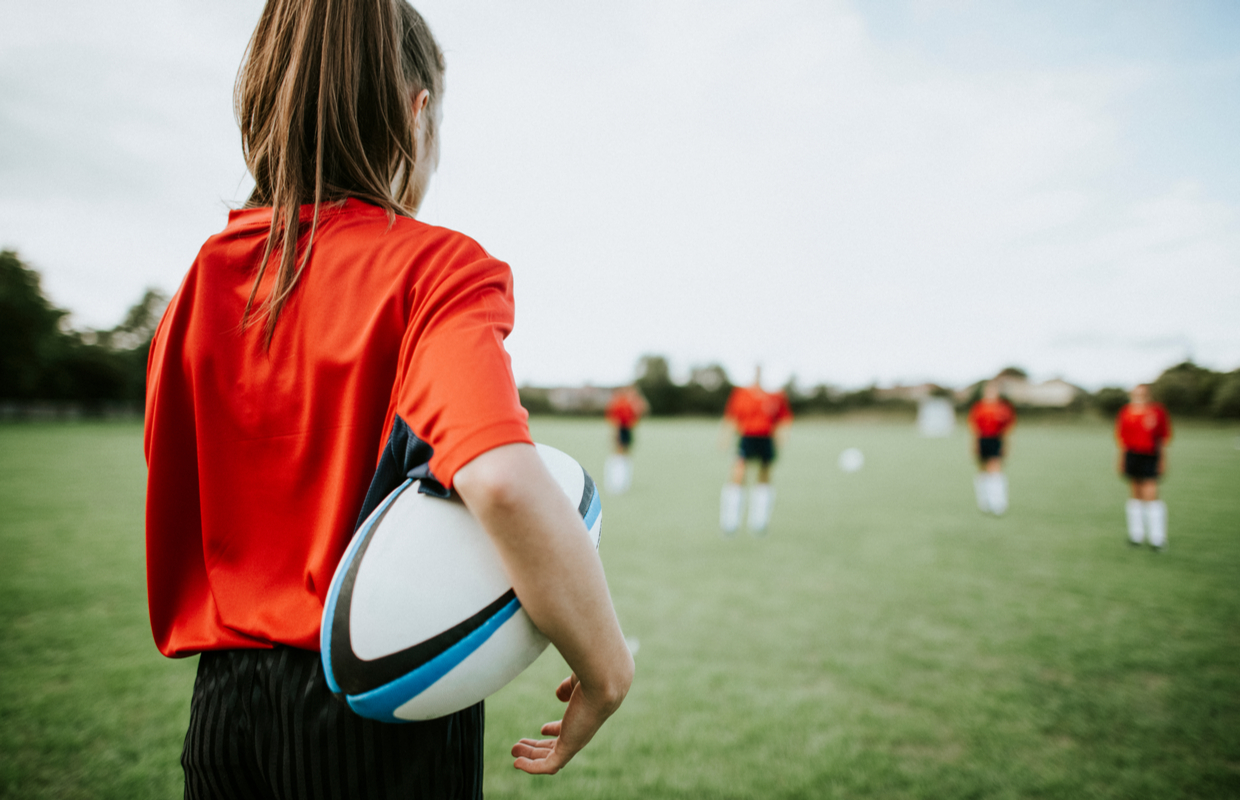 There are two main types of rugby to try. Rugby union has 15 players in a team, while rugby league has 13. Both have different rules and scoring but equally strong social sides. According to England Rugby, women’s rugby is ‘about confidence and contact, fitness and femininity, pride and performance’.

Get involved: Visit englandrugby.com to search for a local team and find other ways to try the sport, including O2 Touch, for which women of all abilities can play touch rugby in a sociable setting, and Warrior Camps, training sessions held at clubs across the country offering women and girls aged 11 and over the chance to experience the sport for the first time.

Alternatively, visit rugby-league.com to find a team near you or learn about Tag Rugby and Touch RL (minimal contact versions).

‘RUGBY IS MY STRESS RELIEVER’ 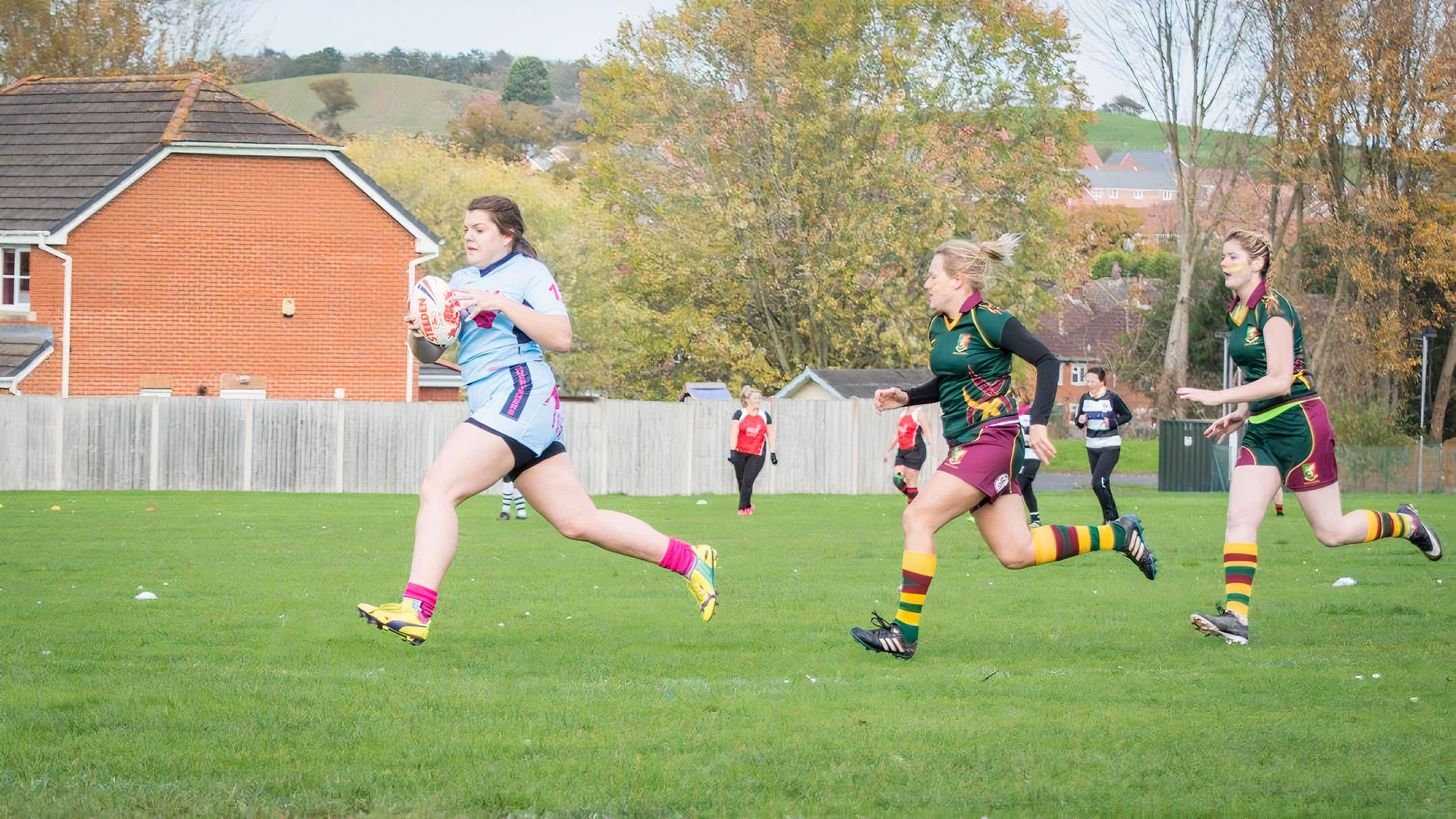 Amy Flynn (left), a PR executive from Studley, Warwickshire, plays rugby. She says: ‘I’ve been playing with the Queen fishers in Redditch for seven years. I think that’s a testament to the community we build through the game. It’s a pressure-free zone, with no expectations.

‘We have girls join from the age of 14 and women continuing to play into their 50s. Some have never thrown a rugby ball before and others have built the confidence and skill to go on and play for the county.

‘I’ve played throughout my GCSE’s, A-Levels and two university degrees. It’s been my escape and stress reliever every time. The team has watched me grow and supported me outside of the rugby environment. Some of the women have become like mothers, others like sisters and a lot of them are best friends.

‘I’m working from home, so being able to get out and train twice a week and meet up for social events is great for keeping my mind active and healthy. In my first tournament following the pandemic, it was clear my fitness levels had dropped. I’m going to gym classes to build my fitness now. I hope it helps me make a real impact on the pitch and to the team.’

Women’s football has never been more popular in the UK, with a record 17 million viewers for the 2019 Women’s World Cup. A fantastic cardio workout, 11-a-side games are played over 90 minutes. Shorter, small-sided games on reduced size pitches are also available.

Get involved: The Football Association will help you find a local club to play at. You’ll also find details on its football-themed Soccercise workout. This is a 45-60 minute indoor or outdoor class suitable for women of all levels of fitness that combine fitness exercises with football.

Alternatively, visit englandfootball.com for information on the Snickers Just Play. This is a scheme where you can turn up for an hour-long recreational kickabout without committing to a team.

Click here to discover the benefits of a group fitness class!