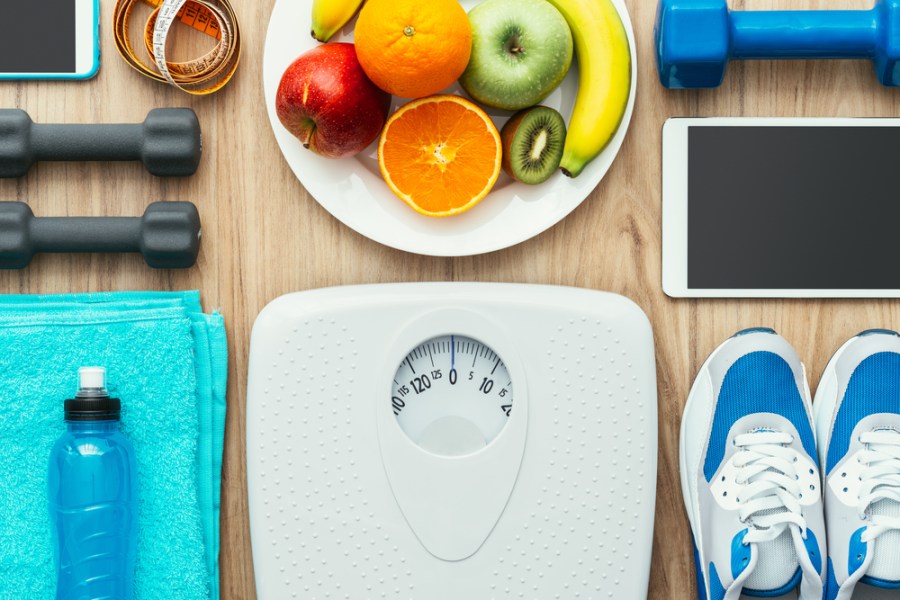 For years, we’ve been told to count calories for weight loss, but now, according to nutritional experts, we should be looking more closely at the nutrients we consume instead. Nutritionist Angela Dowden explains why.

We’re all familiar with the standard prescription for losing weight – keep an eye on the calories and make sure you don’t consume more than you burn. But an increasing amount of evidence suggest calories are only part of the story, and in fact, an obsession with counting them, however well-intentioned, may even thwart our plans to be slim.

Instead, shifting focus to the quality of our diet, rather than obsessing over the quantity we eat, looks increasingly likely to be the more effective way of managing weight long term.

The concept is illustrated well by a large trial carried out on more than 600 people and published in the Journal of the America Medical Association earlier this year. Researchers recruited adults and split them into two diet groups, called ‘healthy low carb’ and ‘healthy low fat’. Members of both groups attended classes with dieticians where they were trained to eat nutrient-dense, minimally processed whole foods, cooked at home whenever possible.

The idea of the study was to compare how overweight and obese people would fare on low-carbohydrate versus low-fat diets, and to test the hypothesis that some people are predisposed to do better on one diet over another, depending on their genetics and ability to metabolise carbs and fat.

Surprisingly, the results showed that those who had a genetic makeup and insulin response that theoretically predicted a better response to a low carb diet did perfectly well on a low-fat diet, and vice versa.

But, even more interestingly, both groups lost a significant amount of weight –without counting a single calorie.Study author Dr Gardner from Stanford University’s Nutrition Studies Research Group explains: “The only thing we stressed to both groups was that we wanted them to eat high-quality foods – to minimise added sugar and refined grains and to eat more vegetables and whole foods. “Study participants were asking when we were going to tell them how many calories to cut back on, and relieved when we said they didn’t need to think about them at all.”

Calories are not all equal

According to registered dietitian Helen Bond, there’s no arguing with the fact that if you continually take in more energy than your body uses, you’ll gain weight. But she adds: “What’s clear is that there are definitely better and worse ways of spending calories, with some calories being more hunger-curbing than others.

“As a general rule, diets high in refined, high glycaemic index (fast-releasing) carbohydrates are likely to satiate the least. So 200 calories in the form of white toast and jam is likely to leave you feeling hungrier sooner than a 200-calorie meal of poached egg on a slice of grainy toast.”

Everything from the digestive process to a food’s texture can affect how many calories we extract. Cooked, soft foods tend to be easily digested and don’t use up much energy being chewed or digested, so we net more calories from them. But raw foods and those high in protein and fibre are more taxing on the digestive system and use up more energy being processed.

A white rice risotto, and a tuna, vegetable and kidney bean dressed salad might have similar calories, but you’d extract fewer from the salad.

Another issue with the calorie in/calorie out theory is that it can set you up for disappointment when you’re looking to lose a specific amount of weight within a defined time scale.

Until recently, diet experts have always quoted that to lose one pound of fat each week we simply need to create a 3500-calorie deficit over the week (or 500 calories per day) through diet and exercise. But while this might work well for a stone or two, or for a few weeks, it doesn’t work for bigger weight losses or longer time periods.

For example, the old formula predicts that it would take six and a half months (28 weeks) for an average height sedentary woman to slim down from 11 stone to nine stones if she consistently consumes 500 less calories every day. A new, more accurate modelling of weight loss published by researchers from the National Institutes of Health in America suggests that this weight loss would take closer to nine and a half months (41 weeks). The old ‘3500 equals one-pound’ equation fails to take into account how metabolism changes as we diet, with people using up less calories per day as they lose weight over time.

If your focus is calorie counting, it could also cause you to easily overestimate the benefits of exercise. The same researchers who reworked the timeline for weight loss calculated that if a hypothetical 200-pound (14st 4lbs) person added 60 minutes of medium-intensity running four days per week while keeping calorie intake the same daily for 30 days, they’d lose just five pounds. This doesn’t factor in that the body has unconscious compensatory mechanisms after exercise, like fidgeting less, taking more rest or not walking about as much.

Thinking first about whether our food provides good nutrition, not just whether it is “fattening” is the shift that Helen Bond says would benefit most lifelong calorie-counters. And the good news is that as well as being psychologically liberating, it can make our diets more enjoyable. She says: “For example, if you previously blacklisted cheese, swapping to a ‘nutrition first’ mindset would allow you to enjoy a little of your favourite Cheddar or Parmesan because it’s so high in calcium.

“And whereas before you might have chosen the less yummy dressing-free option for your salad, under the nutrition first rule you’d add a little bit of olive oil, which provides cholesterol-lowering saturated fats and antioxidant vitamin E.”

The idea that vitamins, minerals and phytochemicals (compounds found in fruit and veg) may be an overlooked aspect to managing weight has been gaining traction. A study in the International Journal of obesity in 2010 showed that overweight women who took a multi-vitamin for six months (who weren’t put on a diet) lost an average of eight pounds. Commentary on the study speculated that those who took the multivitamins corrected tiny nutritional gaps that may have been slowing their metabolism.

In 2015 another report, this time in the FASEB Journal (Federation of American Societies for Experimental Biology), suggested that inflammation induced by nutritional deficiencies might be a risk factor for cardiovascular disease and diabetes. Overweight people who received two bars high in vitamins, minerals, fibre and antioxidants each day for two months showed improvements in HDL and LDL cholesterol levels (good and bad cholesterol), insulin and blood glucose, and some participants lost weight spontaneously too.

Losing weight the healthy way means making each mouthful count nutritionally, even if that means worrying less about the calories your food contains. For the most part, the nutrition-packed, high fibre whole foods that are healthiest are also the ones that are most satiating, so you’ll feel full long before you’ve overloaded on calories.

However, when you’ve been using the calorie counting method for so long, it can be a little scary letting go and trusting yourself to get it right.

A high water and fibre content means they are the perfect foods for filling you up without expanding your waistline. They also provide phytochemicals and antioxidants that help to quell chronic inflammation in the body (thought to be a contributor to weight gain).

Around 25 per cent of the calories in protein (found in poultry, fish, eggs, red meat, pulses, tofu, and Quorn) are used up digesting it, so it’s more waistline-friendly than carb or fat. It is also good at keeping you satiated – i.e. it keeps you from getting hungry quickly again after you’ve eaten it.

The calcium in dairy not only keeps bones and teeth healthy but may also help control body fat around the abdomen according to research. Plus, dairy is rich in iodine needed for your thyroid gland (which controls metabolic rate) to function properly.