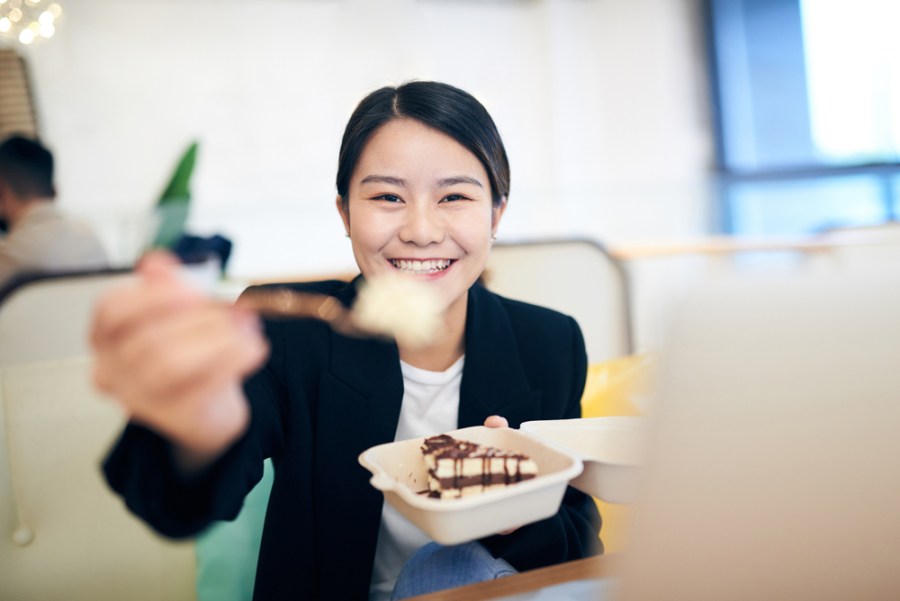 If you’ve just started a healthy eating plan, you’d expect your friends to be supportive, right? Not everyone will be behind you, but you can stop your friends from sabotaging your efforts, says Christina Neal.

I had a friend who was very strict about her eating habits. She looked like an athlete and it was easy to see why. She exercised frequently and didn’t eat any unhealthy foods as they offered ‘no nutritional value’. When I decided to clean up my diet, I thought she would be supportive, but I was surprised when she tried to lead me astray. I remember being at her wedding and turning down the offer of a piece of her wedding cake. I’m not a big cake fan and I just want any. I had found my focus. When I turned it down, she kept insisting I had some. In the end, she grew quite animated. ‘It’s my wedding and I demand you eat my cake!’ She shouted. I continued to refuse. I pondered the situation afterwards. Did she really want me to achieve my weight-loss goals, or would she have preferred me to stay heavier? As an advocate of healthy living herself, I would have expected her to support me.

It’s true that there are some friends who won’t accept our efforts to lead healthier lives and clean up our diets. It can be down to their own insecurities or the fact that they may have tried and failed to lose weight themselves in the past.

‘I think as a nation we really stigmatise people who struggle with their weight – mainly because it’s an issue that’s there for everyone to see, unlike mental health issues,’ says hypnotherapist Jessica Summers-Jackson (info@mybeautifulbirth.co.uk). ‘There’s a view that people who are overweight are weak and lazy. I have no idea why these judgements are tolerated and not considered in the same category as racism. For this reason, to be the ‘last woman standing’ in a social circle where everyone is trying to lose weight and many have failed can be dangerous on a psychological level. It probably stems from a survival instinct that there is safety in numbers. If you can control the weight of those around you then a feeling of safety returns.’

I asked some of my friends what response they had received from their friends when announcing they were trying to change their diet. ‘Sometimes friends were supportive, sometimes I had sabotage and ridicule,’ says musician and busy mum Kristine Wilkinson Hughes. ‘Sometimes it depends on how confident and committed you are that brings about behaviour from others. I find sometimes, much like drinking, some people don’t like to eat alone. But when you introduce a big change – a new way of eating, for example no sugar or going gluten free – it can take people time to catch on. People aren’t always doing something on purpose. They just keep forgetting your new habit.’

‘I’ve had times in my life where I have not consumed alcohol for various reasons and there’s always pressure from friends to “have just one”,’ says holistic health practitioner Christine Bickley (http://www.christinebickley.co.uk). ‘I’m sure this is because if you do something different then you’re not reinforcing behaviour of the group as a whole. It’s fine to be different and not drink or smoke. However, I do think you need to be very positive about your choice and head off any potential persuaders by saying something like: “Please can I ask for your respect and support in my choice to not drink or eat a dessert”. Not everyone will put pressure on you; but many do – they just don’t feel comfortable if someone is doing something different!’

Some people can be quite crafty about how they handle your newfound enthusiasm for healthy eating. ‘I found that you become subtly undermined,’ says reader Andrea Clemens. ‘They may say: “You don’t want to lose any more weight” or “you do too much exercise” when it often feels not to be a genuine heartfelt observation but a projection of others’ insecurities about what they are doing or not doing. Often there is no malicious intent but simply a subconscious reaction.’

Some friends may genuinely mean well and just want to make sure we’re not overdoing the diet, while others may have hidden motives. ‘Some people feel safer if everyone around them stays the same,’ says musician Dawn Moore. ‘Some hate change and feel threatened by it. If you’re happier at a lower weight or being fitter from more exercise, your nearest and dearest should be happy too, but sometimes it doesn’t work out that way. I think we’ve all had negative comments and encouragement to overindulge, whether related to diet or just general life choices.’

Getting our friends on board with our efforts is not always easy, especially when socialising often means going out for meals. ‘A lot of our social lives revolve around eating,’ says psychotherapist Uxshely Chotai, who runs The Food Psychology Clinic which combines nutrition and psychology to manage food issues (www.thefoodpsychologyclinic.co.uk). ‘When you decide to change your eating, it can be very difficult to engage in the same social activities you had previously. Your friends may try to encourage you to eat things that you shouldn’t. Often their intent may not be malicious – when someone around them is eating healthily it puts the spotlight on their bad eating habits and can make them feel uncomfortable. Some friends may be threatened you are making positive changes for your health whereas they seem unable to do so.’

Life coach Steve Chamberlain (http://www.stevechamberlain.co.uk) says it’s about choosing your friends wisely. ‘Within your set of friends, you’ll have some who will genuinely be in your corner and support you to achieve your goals, while others – consciously or otherwise – may be threatened by your efforts. To help maximise your chances of success, pick only those friends in the former category to share your goals with. Then get specific on what – if any – support you want form them. If you want them to stop you from ordering ‘that dessert’ when you’re out together, then give them the permission to whip the menu away, or ask for the bill before the opportunity arises.’

Surrounding yourself with positive friends who support your goals could be a good thing to do, especially if you think you might be led astray by other friends. ‘You’ll know the situations, friends and triggers that are most likely to lead you to moments of weakness,’ says Steve Chamberlain. ‘If you’re genuinely committed to your goal, it may be a wise choice to take these temptations off the table, particularly as you’re establishing new lifestyle habits. It typically takes 21 times to form a new habit, through the formation of neural pathways, so consider making things easy and setting yourself up for success in this early stage.’

Finally, remember it’s all about your own goal and not what other people are doing with their life. You don’t owe them anything and you’re not responsible for other people’s choices. ‘Your goal isn’t to change anyone else or even their behaviour,’ says Steve Chamberlain. ‘It’s to change your own habits. Therefore, instead of focusing on what your friends might say, set your own intention for what you consciously choose to eat or drink, and then commit to sticking to that, no matter what other people’s reactions might be. You have no control over others, but you have 100 per cent control over your own actions, so place your attention there.’