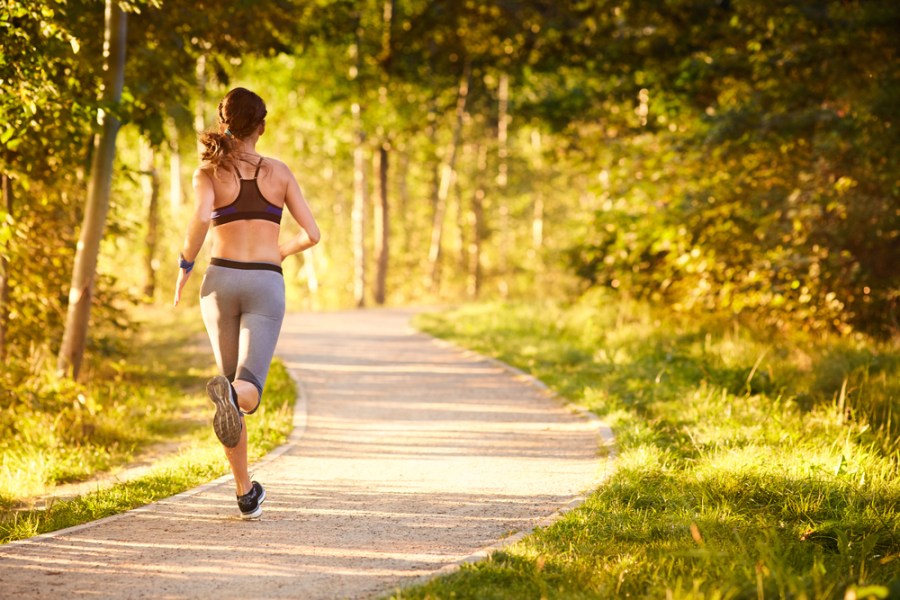 With numerous races cancelled, virtual events are keeping competitive folks fit. Don’t be fooled into thinking they’re just here to tide you over until races resume – they can truly motivate and inspire you, says Sarah Sellens.

Virtual races used to be the lesser-known sibling of mass participation events – not everyone knew of their existence, and many that had heard of them didn’t consider them to be “real races” – but as more and more events have been cancelled due to the pandemic, virtual races have fast become every competitor’s essential. Involving completing a set distance on a route of your choosing, virtual races rely on GPS data to compile results. And guess what – fitness fans can’t get enough of them.

Helen Taczynski, a club runner and recent convert to virtual events, has discovered that they’re a great source of motivation: ‘I’ve done virtual relays and parkruns, which have been a good way to track my progress after having a baby.’

And she’s not the only one enjoying digitalised competitions. ‘I did a virtual mile race in memory of a friend with nine other runners who wouldn’t have done it otherwise,’ says running coach Richard Pickering.

Sign-up figures indicate that there’s an increasing number of virtual runners and cyclists. Last May, Strava received the greatest number of participants ever for its monthly 5K Challenge, with over a million people taking part. ‘It was quite a milestone,’ admits Klima. ‘These events have always been popular but they’re more popular now, given what’s happening in the world.’ Of course, it’s not only about satisfying competitive needs, but also a way to raise vital funds for charities.

‘One of our partner challenges was the NHS Active Challenge [for which participants donated at least £5 to upload two hours of activity over 12 days], which we did to raise money for our carers and NHS workers,’ explains Klima. ‘We raised £440,000, which is pretty amazing.’ And while you may be doing these virtual events from the comfort of your hometown, you can compete on a global field and enjoy access to races from across the pond.

The growing interest in virtual races

With a growing interest in virtual racing comes a greater need for rules and regulations, but what are the guidelines when competing in an event from afar? Certainly, results tend to be based on the elapsed time (this is the total time you spent completing the distance, including any rest periods recorded while your watch was paused), and there’ll be no cycling a running event or e-biking a cycling segment. ‘We have Strava Community Standards for which we expect people to be kind and play fair, keeping it in the spirit of things,’ says Klima.

It’s also worth checking individual race rules, as some organisations will disqualify results that have too high an elevation drop (in other words, too much of the route is downhill), and be mindful of competing on short circular loops such as a track because GPS data can overdo these distances. ‘One of the big rule debates is what type of activity will be accepted,’ adds Klima. ‘I don’t mean whether it’s a run or a ride, but whether the organisers will accept a virtual run or ride such as those done via Zwift [a virtual running and cycling app, generally used with an indoor bike or treadmill]. And do they want to accept manual updates? Normally, organisers are keen to ensure there are some GPS data.’ Always check the virtual race rules before taking part.

With lockdown measures easing, you might be wondering whether virtual racing has a place in post-pandemic schedules – and yes, it does. ‘Certainly, we’ve seen more people getting involved recently and I’m sure it’s a way of replacing the physical events they’d have been doing had the pandemic not happened,’ says Klima. ‘But I think there are complementary factors to virtual and physical races. You can use a virtual race to train for a physical event, for example – it doesn’t have to be a binary choice.’

Indeed, experts are quick to point out that the motivation that comes from setting a target, such as running a 10K, is the same whether done virtually or physically. And let’s not forget the support you get from a digital community. ‘Knowing that you’ve signed up to a virtual race, they’ll provide encouragement,’ adds Klima. ‘There’s the same camaraderie that you’d get from a physical event.’

In fact, it’s easy to brush off virtual racing as being a by-product of lockdown but the proliferation in hardware (from GPS watches to virtual training apps) and participant statistics tell another story. With more people showing interest year-on-year, virtual racing is clearly here for the long haul.