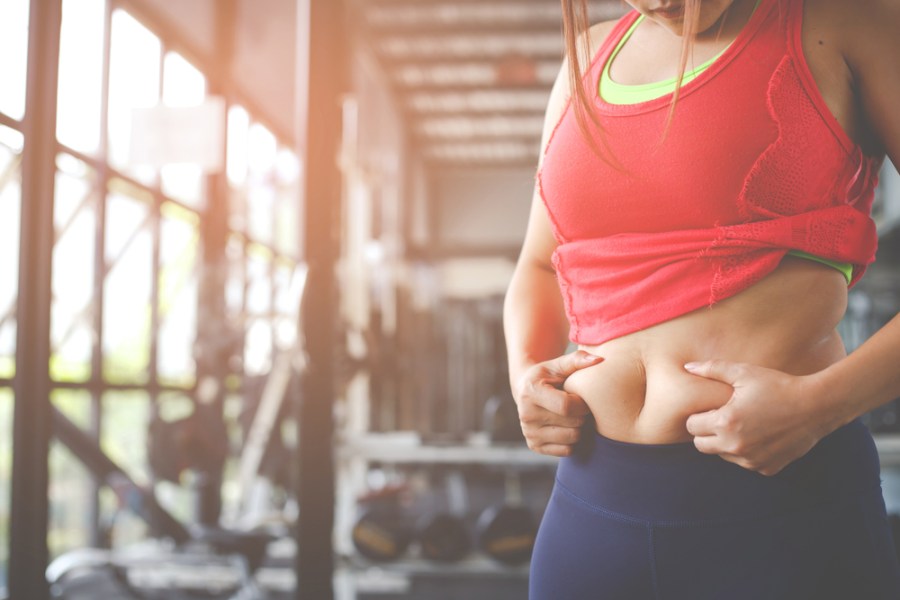 If you’ve been finding it hard to shift the excess fat around your middle, there’s plenty you can do to change this. Take a holistic approach, not just incorporating more crunches into your workouts, but addressing your stress levels and tailor the intensity of your training so that you burn fat rather than carbohydrate stores.

Try to control your stress levels if you can. ‘Many of us live under chronic stress, but your body can’t distinguish between a missed appointment and a life-threatening situation,’ says Dr Marilyn Glenville, PhD, nutritionist, ‘so it reacts the way it always has, by releasing adrenalin and cortisol (the ‘fight or flight’ response). This provides your body with instant energy for five to ten minutes. Stress is almost continuous for many. and comes without the natural release that fighting or fleeing might provide. Unless you do something physical, all that extra energy – in the form of fat and glucose – it is re-deposited as fat around the belly. The reason it chooses your middle because it’s close to the liver where it can most quickly be converted back into energy if needed. Exercise must become one of your priorities to control the potentially damaging fight or flight response.’

Cut back on caffeine, sugar and refined carbs and eat little and often, as stress hormones are released when your blood sugar drops.

Are there any particular exercises that are best for toning our tummy and if so, how often should we do them? Sarah Lindsay, three times Olympian and founder of Roar (@Roarfitnessgirl) says:

‘Weights! If you’re lifting weights, your core supports your movements in a much more functional way than if you’re simply doing crunches. For example, if your legs become stronger, you’re going to run faster, so you’ll be engaging (and toning) your core more. Building up your lifting will also mean you’re going to be stronger at any class you take for fat loss.

‘If you’re starting out, train at least three times a week – four would be ideal. Aim for 45 minutes for the workout, plus warm-up and cool-down. I start people on higher reps – two or three sets of 13-15 reps – so when you get tired or start to lift heavier, you’re able to hold your technique better. And take a good 60- to 90-second rest between each lift, so you’ve recovered enough to do the next one. To find the right weight for you, chose one where you can get to 13, but not past 15 reps.

‘Aim to incorporate big exercises that use lots of different muscles, for example, a squat pattern, unilateral work for the legs (such as split squats or lunges), press-ups or chest press, pulls, hip hinges or deadlifts and shoulder presses. To plan a programme for yourself, think about how the joints work and find an exercise that covers each plane of movement.’

Is it harder to get a flat belly as we get older? Dr Sara Palmer Hussey, scientist and author of The Bodybliss Protocol (amazon.co.uk; £9.99) says:

‘It can be harder to get a flat belly as we age, mainly due to an increase in insulin resistance. Your muscle cells lose their ability to respond to insulin first, and your fat cells are the last to become insulin resistant, so they continue to take in and store extra fuel as fat. Menopause can also exacerbate insulin resistance, largely as a result of the loss of oestrogen’s positive influence on insulin signalling.

‘Belly fat also fuels inflammation,’ Sara adds, ‘which exacerbates whole body insulin resistance, so the more belly fat we accumulate, the worse insulin resistance becomes in a self-perpetuating cycle. As we get older, our metabolic rate can slow down, so we need fewer calories to cover our energetic requirements, and the excess is stored by the body as fat. A bloated belly could also indicate poor gut health rather than excess fat in that area.

‘However, you should be able to attain a flat belly easily if you keep insulin resistance in check, strengthen your metabolic rate, improve your gut health and balance your hormonal levels and your stress levels. One easy technique used in The Bodybliss Protocol involves leaving at least 12 hours between the last meal of the day and breakfast, which allows the body to clear insulin and start to reverse insulin resistance. Coupled with concentrating all eating into just two or three meals during the day, this facilitates a metabolic shift from glucose as a main fuel source to fat instead.’